You can’t park there!

It was a pleasant, quiet Wednesday afternoon in 2002 when Chic Nash’s rink were enjoying playing a Wemyss League Senior fixture against Thornton B.C. The peace and tranquillity was shattered. when a Vauxhall automatic car came crashing through the sheet metal fence and hedge, about 3 metres from the entry gate, to land on the banking with its front wheels inches from the turf, still spinning around. The lady driver eventually switched off the engine and went on to explain that she was leaving the school car park opposite, when she meant to put her foot on the brake. Instead she put her foot flat down on the accelerator, causing the car to come crashing through the fence and hedge and almost on to the green. 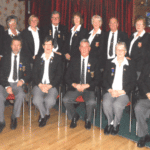