At the 1975 A.G.M. it was decided that the new Clubhouse would be opened from 20th December, however it was agreed that the Club would be officially opened on 27th March, 1976. 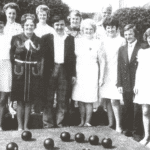