After the cessation of the 2nd World War the Club continued to thrive and a greenkeeper’s house – 3 Landel Street – was purchased at a cost of £675. Due to continual problem of acquiring a greenkeeper, the position was advertised with a weekly wage of £6. 5/- plus a rent-free 3 apartment house. There were 15 applicants for the post. In 1947, electricity was installed into the Clubhouse with Fife Electric Power Company laying the cable and Spittal installing the lighting and power points. 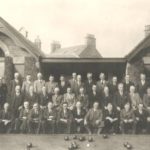 During the 1930s
Centenary Year Fund