The existing Bowls House was extended in 1903 and a Special Meeting was called in September, 1905 to discuss relaying of the green.  This was carried at the A.G.M. in October, but the proposal to raise the annual subscriptions to £1 was defeated and subscriptions remained at 12/6d. The employment of a greenkeeper continued to be a problem and in June 1907 a new greenkeeper was installed, after increasing his wages to £1 per week. After the green was re-laid in October, 1907 it was passed at the A.G.M. that “wearing of rubber shoes be made compulsory”.

Any cookies that may not be particularly necessary for the website to function and is used specifically to collect user personal data via analytics, ads, other embedded contents are termed as non-necessary cookies. It is mandatory to procure user consent prior to running these cookies on your website. 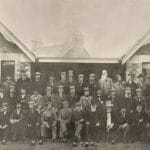