The year 2013 marked the 150th Anniversary of Markinch Bowling Club. A special commemorative was published with the following included from Club President Jack L. R. Harley.

“It is indeed an honour and a privilege to be Gents’ President and Club President of Markinch Bowling Club for its 150th Anniversary celebrations.

There have obviously been many changes since the Club was constituted in 1863. Fortunately, since the inception of the Club, the office bearers have had the foresight to ensure the Club has progressed, as times have changed. Our Club facilities are a testament to many years of hard work and effort from the members.

In keeping with the current difficult financial times, our membership has declined slightly in recent years, but with prudent management, the high standards of the Club have been maintained.

One of the landmarks of the Club, was to incorporate our Ladies Section as full members of the Club in 2000. The club is very much indebted to the lady members for the time and financial assistance they give to the Club.

In our current membership, we have a number of bowlers, male, female and junior, who represent the Club at county level. We are also fortunate to have a Past Scottish Single Hand Champion and Scottish Internationalist, Wayne Hogg. The ability and effort of all these players, ensures that the name of Markinch Bowling Club is kept to the forefront in bowling circles.

I trust that our members will enjoy and participate in the celebrations planned for the season ahead. Likewise, I hope that all who visit the club, whether it is in competitive games or friendly games, enjoy our hospitality and friendship.” 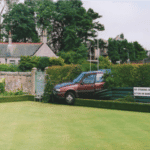 You can’t park there!